In’N’Out Burger is a huge brand in the USA. It is in fact a go-to brand for most fast food lovers in the USA. However, it’s yet to arrive in the UK.

Even though it hasn’t reached the UK market yet, we cannot ignore the fact that it is a great food chain and has a huge potential to make a mark for itself in the UK. Let us discuss the In’N’Out Burger franchise and whether it is likely to arrive at the UK in the near future.

In’N’Out Burger was founded by Harry and Esther Snyder in 1948 and was the first drive-thru burger restaurant in California. In’N’Out Burger has been able to etch itself in the history of California because of its groundbreaking innovations in the food industry.

The company was and is still owned and managed by the Snyder family.

Today In-N-Out Burger is famous all over the USA as a high-quality burger restaurant. The brand is primarily famous for In-N-Out’s three core dishes, the hamburger, cheeseburger, and double-double. The double-double being the most famous is a burger with two hamburger patties topped with two slices of cheese.

Along with other drinks, fries etc, the restaurant offers a ‘secret menu’ which comprises of grilled cheese sandwiches, animal style burger, Neapolitan shakes, etc. The brand has made a conscious effort to not have a very elaborate menu and to keep it small and limited. They believe in quality over quantity and have been able to give competition to many other fast food chains in terms of high quality food products. 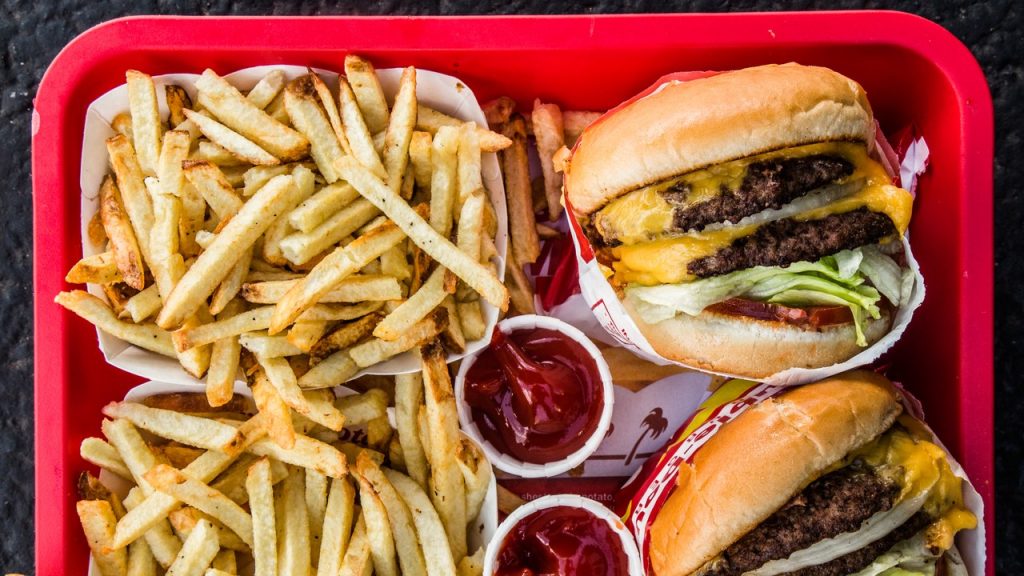 How is In N Out Burger different?

In’N’Out Burger is unlike any other fast food restaurant. They believe in quality and exclusivity instead of quantity. They have been able to market themselves in a way that their fans think of them as a cult today. Their fan following in the market is unparalleled.  In’N’Out Burger has also restricted their presence to only the west coast of the USA which gives them a sense of novelty and exclusivity in the food industry. Every time they open a store outside of California, it becomes a huge event.

In’N’Out Burger has not just managed to keep its customers happy, the also company gives equal importance to its staff. They are known to give their employees a salary that is more than the minimum wage guidelines of the government. They make sure that their employees have a happy environment to work in.

In N Out Burger franchises in the UK

Unfortunately, currently there aren’t any In’N’Out Burger outlets in the UK, and so far the company hasn’t announced any plans for arriving in the UK either. In fact In’N’Out Burger has often stated that they will never venture into franchising to grow their business.

The In’N’Out Burger has always been owned by the Synder family and they plan to keep it like that.

In N Out Burger events in London

Even though they do not have an outlet in the UK, the company does like people to know of its presence. In 2016, In’N’Out Burger had organized a one-day pop-up store in London. This event was a massive success. Customers were early to crowd the store and had formed queues stretching out to a mile. Even though the company still maintains that it has no plans of expansion in the UK, this event was a clear indication of the company’s popularity in the region.

Why won’t In N Out Burger enter the UK?

This would come as a disappointment to many investors, but In’N’Out Burger isn’t likely to enter the UK market anytime soon.  The company believes that its exclusivity comes from the fact that it operates from limited places. Expanding to other regions may reduce its exclusivity factor as it has in the case of popular chains like McDonald’s, Burger King, etc.

There are also many other fast food chains from the USA that have entered the UK and can pose competition to In’N’Out Burger.

Moreover, In’N’Out Burger prides itself on quality and the company feels that quantity may drain them of their quality. They believe they can successfully work in the West Coast and deliver quality food rather than be spread out everywhere and not meet the quality mark.

Other Alternatives to In N Out Burger that you can consider

Though In’N’Out Burger is not a brand you can invest in, in the UK, there are many other similar fast food chains that you can consider. Some of these examples are Loaded Burgers, Rockets etc.

Both these brands are huge names in the food industry and are growing at a rapid pace.